In a previous post I introduced a turn-based strategy game based on Lego ® medieval men and a chessboard. Part of the fun is finding agreement with your opponent about special rules and new pieces, and testing if the game stays balanced after introducing all the novelties.

Here I'm describing a couple of new pieces and a new kind of attack. Both pieces described here can be represented by the Lego character called "The Princess". The new kind of attack is available to every piece, under certain limitations.

Medusa is a female monster of the Greek mythology. She had the power to turn anyone who looked directly into her eyes to stone. In Less-or-Chego Medusa has the following stats:

The Healer is a mage focused on healing magic. In Less-or-Chego the Healer has the following stats: 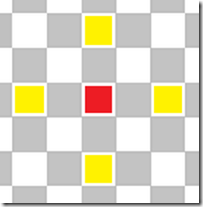 "Go for broke" is a new kind of attack and it consists in throwing objects upon an opponent! An elm, a shield, even the princess' wig will do! Throwing an object deals 1 damage to an opponent but takes away 1 point of movement. The thrown object is removed from the game after the attack. This attack is available to any living piece on the battlefield, provided it has something to throw...

On the right: yellow squares represent the position where an opponent can be hit, supposing your piece stays on the red square.