Several days ago I realized my son has a sufficient number of Lego ® medieval men to build a couple of armies and make them fight on the battlefield! Both being chess lovers we used a standard chessboard to layout our fighters.

The black army is traditionally evil. Necromancers and siege weapons are welcome here.

Chivalry is the spice of every battle... so, after a couple of trials, we agreed on the following rules. 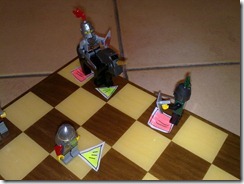 If you don't have a sufficient number of accessories (such as shields and weapons) you can use simple paper tokens to assign Attack and Defense points to your army. Building these tokens can be part of the fun!

You are welcome to throw your fireballs... er... comments!

The game goes on with the Expansion One.